Ethereum Reorgs After The Merge

There has recently been discussion about the possibility of miners adopting a hypothetical modified Ethereum client that allows them to essentially accept bribes to make a short reorg of the chain (the main use case for making such bribes being to attack DeFi protocols).

In this post, we explain how this attack vector will be harder to execute post-ETH2 merge.

What is the fork choice rule and why is it important?

A fork choice rule is a function, evaluated by the client, that takes as input the set of blocks and other messages that have been seen, and outputs to the client what the “canonical chain” is. Fork choice rules are required because there may be multiple valid chains to choose from (eg. if two competing blocks with the same parent get published at the same time).

What's the status quo in Ethereum?

In Proof of Work blockchains like Ethereum, we typically see the "longest chain rule" (or, more accurately, "highest-total-difficulty chain rule"). This means that when a client is shown 2 blockchains, it chooses the one with the highest total difficulty (i.e. the sum of the difficulty of all blocks in that chain).

Assuming for the sake of this example that blocks can have difficulty of either 100 or 110, imagine the below scenario:

You can see where this is going. If a new block 4a arrived declaring 3a as its parent, the fork-choice rule would switch over back to the first fork and so on.

The impact of chain reorganizations

Short reorgs happen all the time due to latency. Miner A and Miner B may find a valid block simultaneously, but due to how blocks propagate in the p2p network, a part of the network will first see A's block and another part will see B's block. If the two blocks have the same difficulty, there will be a tie, and clients either pick randomly or choose the earlier-seen block. Typically, the tie is eventually broken when some third miner C builds a block on top of either A's block or B's block, and the other block is forgotten. Occasionally, bad luck can lead to 2-5 block reorgs. Reorgs longer than that are almost always due to extreme network failure, client bugs, or malicious attacks.

Short reorgs are not fatal, but they do still have some important detrimental consequences to the network:

The worst thing that can happen

In the worst case, frequent reorgs can completely nullify a blockchain's settlement assurances and prevent it from progressing. Normally, the "incentive compatible" tactic for a block producer should be to extend the longest chain. But what happens if one particular block's post-state is exceptionally lucrative (in the sense that there are very high fees or MEV that can be extracted only by building a block directly after that block)? This issue was explored in the past in the context of Bitcoin without the block reward & Selfish Mining and is being explored today in the context of DeFi-related MEV in the Ethereum ecosystem.

In these cases, there is a large incentive to try to "steal" the fees or MEV by competing with instead of extending the tip of the canonical chain. In the example below, block 1's post-state is exceptionally lucrative, and block 2a has already been mined. However, not 1 but 3 block producers have chosen to mine on top of block 1 instead of block 2a (in order to claim any MEV exposed after block 1), and this could extend to an arbitrary number of parties.

For obvious reasons, such a pattern opens a wide door for malicious 51% attacks. We call miners engaging in such reorg-mining tactics "myopically rational" because the decision to do so can be rational in the short term. However, they have an explicit (stakers) or implicit (miners) long position on ETH (since fees and the block reward are denominated in ETH), which means that any such attacks that reduce user trust in Ethereum would be against their best interest, and thus not rational long term.

Post-merge Ethereum with Proof of Stake

In Nakamoto PoW, the blocks are solidified in the fork choice "serially". First, a block is mined, at which point a single competing block can potentially reorg it. If the block survives as part of the canonical chain, after (on average) 13 seconds some other miner builds a second block on top. At that point, a chain of two competing blocks is needed to reorg it. As more blocks get built on top, the difficulty of reorging the chain continues to increase, but slowly.

The Ethereum beacon chain implements a PoS protocol called Gasper with a fork-choice rule called LMD-GHOST. Contrary to Nakamoto PoW, there are 2 roles during block production:

Every 12 seconds there is a "slot", which represents an opportunity to propose a block. For each slot, a shuffling algorithm pseudorandomly chooses a committee consisting of ~1/32 of all validators, where 1 validator in each committee is the proposer and the rest are the attesters. The attesters proceed to vote in parallel on blocks that they consider to be part of the canonical chain. Because committees are sampled pseudorandomly, attackers do not have a way to concentrate their validators into a single slot.

Today, the Beacon Chain has 196k validators, meaning every slot has a committee with a size of 6125. As a result, even single-block reorgs are extremely difficult, because an attacker controlling only a few validators has no way to beat the honest majority of thousands of attesters.

To gain some intuition on why this is true, let's see an example with 2 slots and 24 validators, where 9 of them are malicious. The validators get split into 2 committees, where due to the random shuffle, an adversary is unlikely to ever control >50% of any of the groups they get assigned to and cause a reorg. 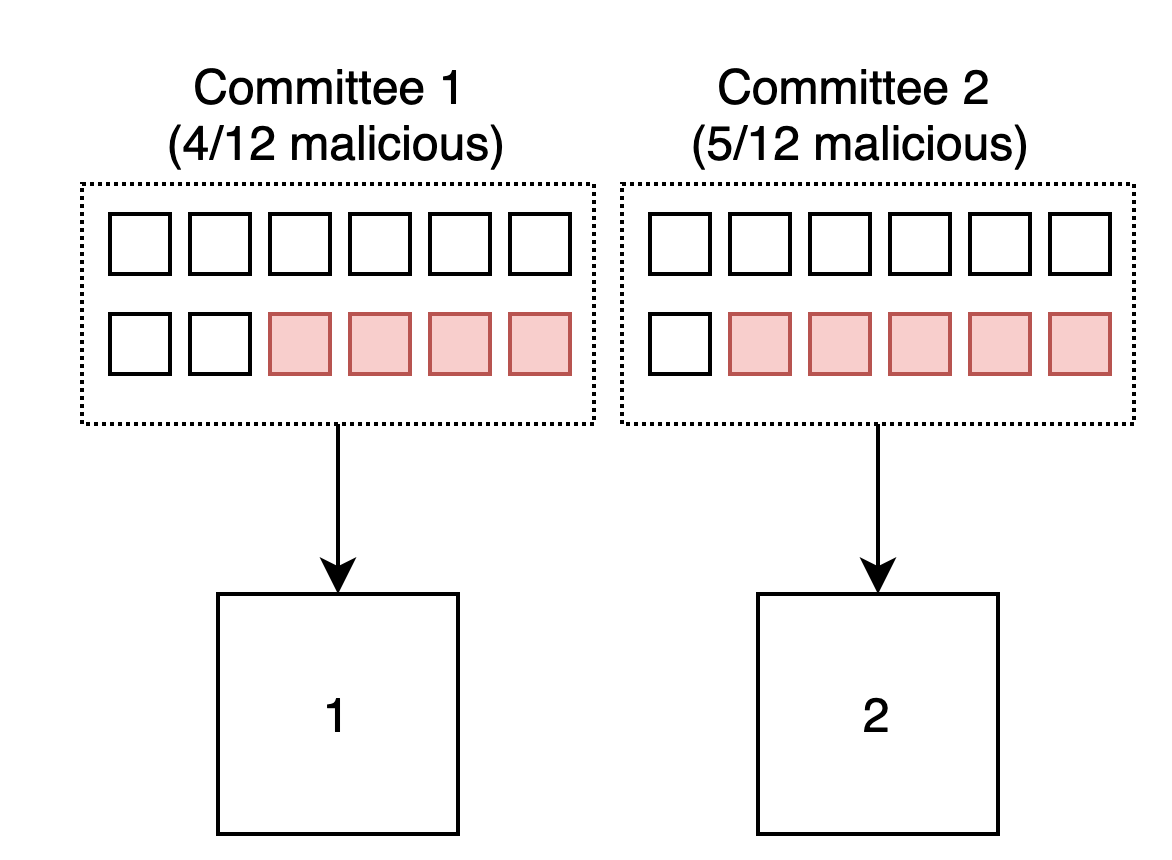 More formally, the probability of a malicious actor with p% of stake controlling over 50% of an N-validator size committee follows a binomial distribution (where k = N/2):

Computing the probability for various stake values, we get the following table:

We now understand that making a reorg directly requires the attacker to control close to 50% of all validators.

There are more subtle attacks that are possible if an attacker has ~25-49% of attesters (see this paper, or here for a quick summary). However, there are known fixes to these attacks that can be implemented unobtrusively, increasing security closer to an unconditional 50%.

Finally, long reorgs are not possible because all blocks that are deeper than 2 epochs in the past are considered "finalized", i.e. it is impossible to revert past them. If an attacker caused two conflicting blocks to be finalized (e.g by controlling 67% of the stake), the system would need to fall back to social intervention to recover.

Now that we've seen how reorgs work across different fork choice rules, it's worth going through a simple game-theoretic example to understand when it would make sense for a miner or validator to run software that executes reorgs to profit.

We can informally describe each scenario with a payoff matrix, where "defect" means "download and use the software that implements reorgs". The payoffs are "myopic", not taking into account long-term consequences.

In longest-chain PoW, short-range reorgs can be done probabilistically with even a small portion of the validator set. There will always occasionally be blocks with exceptionally lucrative post-states such that even a 1-10% success rate is worth trying to compete with an existing child of that block.

The miner could either be a medium-sized pool banking on the possibility that they will find the next 2-3 blocks in a row, or they could send some portion of their revenue into an anyone-can-claim contract to bribe others running the same software to build on their chain and help it overcome the existing canonical chain.

As a result, some miners may be tempted to run reorg clients.

In Gasper, reorgs of 1-64 slots are possible, but require the attacker to control a large portion of the entire validator set (because they cannot concentrate their stake in a specific slot, so they need to be large enough to have enough stake randomly selected in the slot range they want to attack). Adoption of reorg-mining software is useless unless a very large number of other validators also adopt it at the same time.

Hence, if 51% of validators have even the slightest level of altruism or laziness, no one running reorg-mining software is a stable equilibrium.

In Tendermint, the story is even cleaner: reorgs are impossible outright, and any violation of single-slot finality would require 1/3+ of validators to be slashed. Similar to the Gasper case, this also means that no one running reorg-mining software is a stable equilibrium.

As we can see from the above, while adoption of "reorg geth" is possible in all cases, fork-choice rules based on some notion of parallel attestation have honest equilibria which are more stable than the equilibria in Nakamoto fork-choice.

The most effective prevention measure in the context of Ethereum is to further speed up work on the merge, in particular, to quickly achieve the credible capability of making an "emergency merge" which would transition the chain to PoS. Rushing the merge would have high risk and might break infrastructure, but a credible commitment to do it anyway if many miners start reorg-attacking the chain would align incentives against such behavior.

The time close to the merge is the time of greatest risk because miners are still in charge of the system but their time horizon decreases. However, two factors mitigate this risk:

Post-merge, reorg validating will become much less of a problem, because single attesters or small groups of attesters cannot reorg a block on their own. Reorg-attacking successfully requires solving the hard coordination problem of getting a large portion of validators onboard at the same time. However, some small risk remains. If it is desired to improve security further, then Ethereum can either adjust the fork choice rule further to increase reorg attack requirements to the 50% theoretical maximum or find a way to move toward single-slot-finality consensus outright.

Acknowledgments: Thanks to Dan Robinson, Anish Agnihotri, Kevin Pang, Dave White, and MEVIntern for comments on drafts of the post.

Disclaimer: This post is for general information purposes only. It does not constitute investment advice or a recommendation or solicitation to buy or sell any investment and should not be used in the evaluation of the merits of making any investment decision. It should not be relied upon for accounting, legal or tax advice or investment recommendations. This post reflects the current opinions of the authors and is not made on behalf of Paradigm or its affiliates and does not necessarily reflect the opinions of Paradigm, its affiliates or individuals associated with Paradigm. The opinions reflected herein are subject to change without being updated.